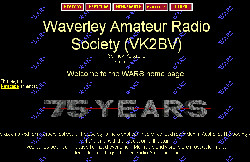 This page shows the club’s first website, designed in 1995 though this version is a year later, but had little change, as we were unable to find a copy of the very first pages. We believe this was the first website for any Australian amateur radio organisation and was created by our youngest member at that time, Ben VK2XUF, who saw it as a technical challenge rather than being of benefit to the club. Click to access the club’s 1996 website 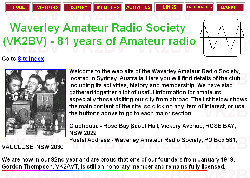 This page shows the club’s website at the end of 1999. Changes from the original site include a white background and the addition of pages covering lists of useful local frequencies, information for visitors as well as a Buy and Sell page.

The aim of the website at this stage, and indeed today, was to act as a reference source to members and to provide information for non-members. Day to day communication was carried out via email, post or over the air. Click to access the club’s 1999 website

Changes in this version include providing more general amateur information such as details of reciprocal licences from a number of countries. Today this type material is more readily found on official web sites so has been removed from our site since it would be difficult keeping up with changes.Because of the number of topics covered by the site has increased beyond the number of buttons due to the inclusion of such pages as maps showing the club’s location, descriptions of special activities etc, the home page now lists most of them as an early form of site index.Click to access the club’s 2001 website in a new window. This site is a copy of the original so is interactive, though many of the external links are out of date. 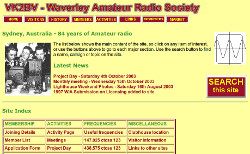 Changes to the website this year include the introduction of a site index, search facility, style sheets and the first use of frames. These features improve the navigation as well as easing maintenance, avoiding the necessity to code links at the top of each page.Later sites have a separate site index page as well as the abbreviated list of topics in the left side-bar.Content differences include linking to a separate Photo Gallery. This makes loading photos much easier as the maintenance software is part of the gallery. Because the gallery can be restructured, later web sites do not refer to particular albums as this one does.

By this time virtually all our members had email facilities which then became the normal method of communication though the website continues to be a reference point for semi-fixed information about the club.

Click to access the club’s 2003 website in a new window. This site is a copy of the original so is interactive, though many of the external links, including the Photo Gallery, are out of date. 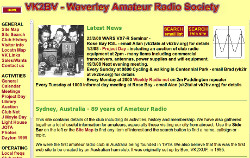 By this time the style of the site had settled down and changes mainly related to topical updates. The site index had been moved to a separate page to tidy up the home page, with a sidebar as the major navigation aid. In addition some information such as that on Reciprocal Licensing was removed as it was difficult to keep up to date and the information was more easily found by our members through search engines. After 10 years there is also less emphasis on links and data relating to other sites, as our members can find these details more easily elsewhere.The purpose of the site remained as a method of providing relatively fixed information about the club and its activities for both members and visitors. People would visit the site when they had a need to seek information or were directed to it by email following a significant update. Contact with members on urgent or short term matters continued to be via email, since all members now had this facility. The site also forms an archive of past information about the club. which resulted in the 2009 version giving access to copies of earlier versions of the website.Click to access the club’s 2007 website in a new window. This site is a copy of the original so is interactive, though external links may be out of date. 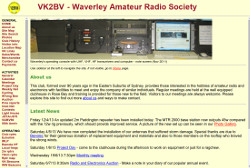 Changes since the 2007 website include tidying up the home page to limit the information to recent news and a brief introduction to the club. This allows regular visitors to the site to avoid seeing the same material each time without scrolling down. The addition of more archive material including copies of some earlier websites was made as part of the 90th anniversary changes and continues as more items come to hand. Steps had also been taken to remove some of the earlier material related to general amateur interest, such as reciprocal licensing, as this was now readily available on specialist web sites.Click to access the club’s 2013 website in a new window. This site is a copy of the original so is interactive, though external links may be out of date.

The club continues to remove further general information in areas such as other local repeaters and there is less emphasis on links to other sites since visitors as net users are more familiar with search engines. More attention is being paid to purely club information especially archival material when found. The photo gallery is now to a large extent superseded by club entries on social media sites such as Facebook and Google+ that members are more likely to visit regularly. The general layout remains much unchanged with the site being more a source of reference material than of active information.

With the sad passing of Simon Buxton early in 2015, a new team took on management of the web site and relocation of the site from servers housed in a private residence to an AWS instance.   At this time the site was updated to a WordPress instance to encourage contribution from all members, provide better integration with Social Media sites, and support member only services and online payment options for training and membership fees.

The original web site archives have been preserved and are hosted at http://archive.vk2bv.org, alongside Simon’s personal pages which will be maintained by the club in his memory.

The role of web administrator will now be taken up by a team of elected individuals at the annual AGM, with content contribution encouraged from all members of the club.